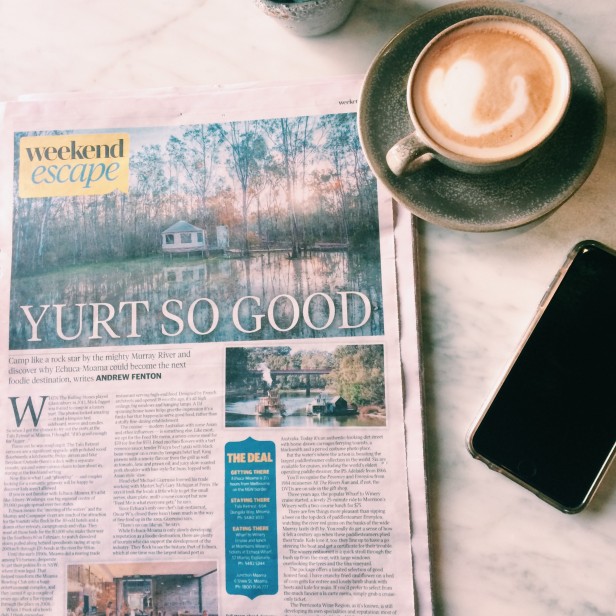 Have a read of what Herald Sun’s Andrew Fenton had to say about Junction when visiting the region for publication weekend escape.

Camp like a rock star by the mighty Murray river and discover why Echuca-Moama could become the next foodie destination, writes ANDREW FENTON.

When the Rolling Stones played Glastonbury in 2013, Mick Jagger was forced to camp in a luxury yurt. The photos looked amazing – it has a kingsize bed, sideboard, mirror and candles. So when I got the chance to try out the yurts at the Talo Retreat in Moama, I thought, “If it’s good enough for Jagger…”

Turns out hew was roughing it. The Talo Retreat versions are a significant upgrade, with polished wood floorboards, a kitchenette, fridge, zircon and fake fireplace. Outside there’s a deck with separate ensuite, spa and some cabana chairs to laze about in, staring at the bushland setting.

Now this is what I call “glamping” – and couples looking for a romantic getaway will be happy to discover kids aren’t allowed.

If you’re not familiar with Echuca-Moama, it’s a bit like Albury-Wodonga: one big regional centre of 20,000 people spread over two states.

Echuca means the “meeting of the waters” and the Murray and Campaspe rivers are much of the attraction for the tourists who flock to the 30-odd hotels and a dozen other retreats, campgrounds and villas. They need all those beds for the 80,000 who make their way to the Southern 80 in February, to watch the daredevil skiers pulled along behind speedboats racing at up to 200km/h through 126 bends in the river for 80km.

Until the early 1990s, Moama did a roaring trade among Victorians, desperate to get their pokies fix in NSW, where it was legal. That helped transform the Moama Bowling Club into a huge entertainment complex, and they jazzed it up a couple of years ago after a fire ripped through the place in 2008.

When I think of a bowls club, I think cucumber sandwiches and beers “at genuine 1972 prices”. Here it means four bars, three function areas, a cafe and a 320-seat Bistro serving 5000 covers a week.

The cuisine – modern Australian with some Asian and other influences – is something else. Like most, we opt for the ‘Feed me’ menu, a seven-course meal for $70 (or five for $55). Fried zucchini flowers with a tart romesco sauce; tender Wagyu beef tataki with black bean vinegar on a crunchy tempura betel leaf; King prawns with a smoky flavour from the grill as well as tomato, lime and prawn oil; and juicy slow-roasted pork shoulder with bao-style flat buns, topped with Asian style ‘slaw.

Head Chef Michael Giarrusso learned his trade working with MasterChef’s Gary Mehigan at Fenix. He says it took the locals a little while to get the small serves, share plate, multi-course concept but now ‘Feed me is what everyone gets,” he says.

Since Echuca’s only one chef’s hat-restaurant, Oscar W’s, closed there hasn’t been much in the way of fine food up in the area, Giarrusso says.

While Echuca-Moama is only slowly developing a reputation as a food destination, there are plenty of tourists who can supper the development of the industry. They flock to see the historic Port of Echuca, which at one time was the largest inland port in Australia. Today it’s an authentic-looking dirt street with horse-drawn carriages ferrying tourists, a blacksmith and a period costume photo place.

But the water’s where the action is, boasting the largest paddle steamer collection in the world. Six are available for cruises, including the world’s oldest operating paddle steamer, the PS Adelaide from 1866.

You’ll recognise the Pevensey and Emmylou from 1984 miniseries All The Rivers Run and, if not, the DVDs are on sale in the gift shop.

Three years ago, the popular Wharf to Winery cruise started, a lovely 25-minute ride to Morrison’s Winery with a two-course lunch for $75.

There are few things more pleasant than sipping a beer on the top deck of paddle steamer Emmylou, watching the river red gums on the banks of the wide Murray lazily drift by. You really do get a sense of how it felt a century ago when these paddle steamers plied their trade. Kids love it, too: they line up to have a go steering the boat and get a certificate for their trouble.

The winery restaurant is a quick stroll through the bush up from the river, with large windows overlooking the trees and the 6ha vineyard.

The package offers a limited selection of good honest food: I had crunchy fried cauliflower on a bed of corn grits for entree and lovely lamb shank with beets and kale for main. If you’d prefer to select from the much fancier a la carte menu, simply grab a cruise-only ticket.

The Perricoota Wine Region, as it’s known, is still developing its own specialities and reputation: most of the vines were planted int he 1990s and there are only 10 wineries.

Morrisons Winery deputy manager Cameron Sutton moved from Sydney to the region and says he believes the are has lots of untapped potential.

“Echuca’s not a foodie town yet but we’re here to change that,” Sutton says.