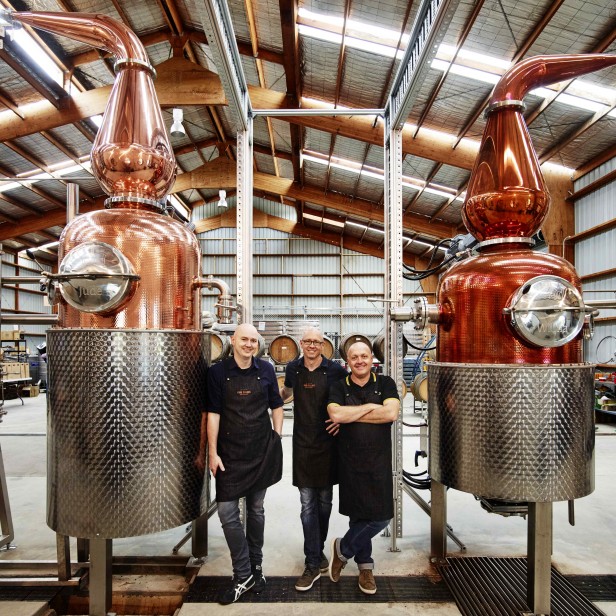 Gin is undoubtedly a staple spirit for any cocktail, whether that be in the space of a bar or in the comfort of your own home. Four Pillars is the perfect gin for all occasions, a classic gin with a touch that would fascinate and delight even the most hardened gin fanatic. It’s spicy but with great citrus, a truly modern Australian gin.

We spoke with the team behind the Australian distillery to discuss how their small country business grew to win several golden awards all across the world, in the space of just three short years.

We started with the idea of making a kick-ass tonic many years ago but then thought ‘why the not go all the way and create a great modern Australian gin?’

So, we established Four Pillars Distillery in the Yarra Valley with a clear purpose: to elevate the craft of distilling in Australia and celebrate the art of cocktail making. We wanted to help people drink better, not more.  That journey started with a tour of the US West Coast, from Portland to San Francisco, identifying the techniques and equipment we admired in their burgeoning industry there.  So, after a ton of research, including sourcing the best botanicals from across Australia and around the world, we started test-distilling. And 18 months after commissioning a custom-built copper pot still from CARL in Germany, we took delivery of ‘Wilma’ late in 2013. We launched our first batch of 420 bottles of Four Pillars Rare Dry Gin in December 2013. Crafted in a truly modern Australian style to capture the flavours of both Asia and the Mediterranean, this gin was awarded a Double Gold medal at the 2014 San Francisco World Spirits Competition, back in the region where we started our journey.

What did the founders do previous to starting Four Pillars?

Cameron MacKenzie (our distiller, educator and resident ginnovator) comes from 15 years in the wine trade: making, selling, marketing and judging some of the best wines in Victoria.

Stu Gregor  (our Four Pillars mouthpiece and man about town) is a veteran of 20 years in the drinks business, lifestyle PR and events. He owns Sydney PR powerhouse Liquid Ideas.

And Matt Jones (the branding brains behind Four Pillars) worked as head of Global Head of Strategy at Jack Morton Worldwide before starting his own boutique brand agency, Better Happy.

Explain what botanicals mean for readers who may not know the ins and outs of gin.

The botanicals are the ingredients that flavour the spirit through the process of distillation. Juniper berries are the basis of all gins, serving as a sort of canvas. In addition to juniper we use a variety of local and exotic elements, including native Tasmanian pepperberry and lemon myrtle, and Asian spices such as cassia and star anise. And, somewhat unusually, we also use fresh organic oranges in our distillations to give that aromatic Mediterranean citrus character.

Is there a specific product you are most fond of from your business?

Our Rare Dry Gin really is our heart and soul. It’s our expression of modern Australia – taking great flavour and influence from our local environment, and from Asia, the Middle East and Europe to create a really contemporary, versatile yet distinctive gin.

Where would you take a visitor for an essential country food experience?

Well, you might think us biased, but when it comes to amazing produce we do believe it’s hard to beat our hometown of Healesville in the Yarra Valley. It’s just supremely abundant with incredible natural resources and really talented makers who want to share what they do.

What other local artisans or producers do you admire? Why?

We have the privilege of working with some great producers in our nose-to-tail gin ecosystem. A bit of Jam and Pickle are legends when it comes to preserves. They make our Four Pillars Gin Orange Marmalade out of the oranges used in our distillations. Jack from Stone & Crow Cheese is the mad cheese professor who came up with the idea of using our stillage to make gin cheese. And Yarra Valley Berkshires have been feeding our spent botanicals to a few black pigs for upcoming gin pig dinners.

If you had to choose your last meal, what would it be?

We’re not entirely sure, but it would involve gin, obviously. And quite possibly dumplings.